At Hormones and Beyond 2020, I addressed the effect that Insulin Resistance had on the risk and progression of cancer. Last year, at Hormones and Beyond Jason Fung presented his latest book on cancer with a focus on preventing and treating IR via fasting. Although 90% of adults in the U.S. will succumb to CVD, IR also affects the risk of cancer. As would be expected, Insulin Resistance also increases the risk of AD. I consider CVD, cancer, NAFLD, and AD to be due to the same disease process but in different organs and that can be manifested in different disease states. With the recent FDA approval of aducanumab (Aduhelm) for the treatment of Alzheimer’s disease, it seems only fitting for this year’s Annual Summit: Breakthroughs in Brain Health, CVD, and Autoimmunity that the Brain Health theme to be focused on Alzheimer’s disease and dementia but with a different take than the current focus.

These topics are just scratching the surface of what Dr. Ken Sharlin, M.D., will be discussing. At our 7th Annual Academic Summit: Breakthroughs in Brain Health, CVD, and Autoimmunity he will discuss specific strategies you can use as a provider to protect the aging brains of your patients against Alzheimer’s Disease and cognitive decline, as well as strategies to help those patients who are already suffering.

Similar to the cholesterol-centric model of CVD not being the primary driver of CVD as most patients with CVD have normal cholesterol levels, trying to remove beta-amyloid plaque from neurons does not result in any significant improvement in symptoms of AD. The end result of AD is deposition of beta-amyloid protein and tau protein tangles and aggregates. However, many patients can have significant beta-amyloid plaque in their brains on PET scans but no clinical signs or symptoms of AD dementia.

Again, as is similar to CVD, removing plaque with monoclonal antibodies does not address the source of the disease nor does it reverse the underlying pathologic process leading to apoptosis of the neuron. And there has been no study demonstrating improvement in symptoms by plaque removal. Despite the lack of symptomatic benefit of aducanumab, as well as the significant side effects of brain swelling and hemorrhage, the FDA somehow found logic in approving the drug aducanumab for use in Alzheimer’s disease so that it could be better studied. This has created significant dissension in the FDA as well as the neurologic world, probably more so than any other drug ever approved by the FDA. And there are a host of other medications waiting in the pipeline, all in hopes of finding that magical medicine to reverse and cure AD. Perhaps the tremendous annual cost of $36,000 would be worth it if it did indeed work for improving symptoms.

Interested in taking a deeper dive into the enthralling topic of Dementia and other evidence-based solutions for Alzheimer’s Dementia? Consider attending our 7th Annual Academic Summit: Breakthroughs in Brain Health, CVD, and Autoimmunity. 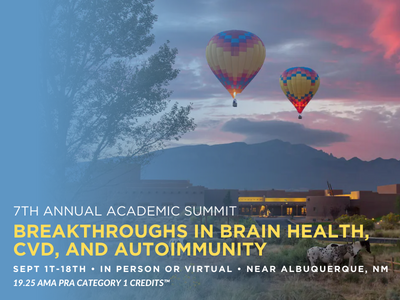