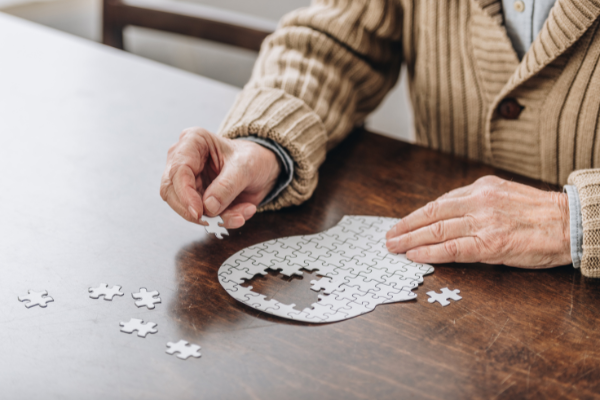 Although we discussed, some of the many observable features of Alzheimer’s dementia and clues as to its development, such as changes in brain glucose utilization and conversion of tau to the incorrect isomeric form due to proteins sitting in the brain for too long, we are still no closer to a cure for AD by conventional standards.

The conventional standards used to treat AD merely slow the progression–not halt–the disease or worse, only mitigate its symptoms. Because AD is very complex, no one drug or treatment works for everyone. The symptoms of mild to moderate Alzheimer’s are often treated with drugs that regulate neurotransmitters, such as donepezil and galantamine (1). Moderate to severe AD is treated with donepezil, memantine, or rivastigmine patches which combine memantine and donepezil (1). Recall that neurotransmitters transmit messages between neurons, so speeding up or altering their transmission may indeed improve the symptoms of AD, but unfortunately, none of these drugs change the underlying disease process (1). For many patients, they merely stave off symptoms for a limited period of time and for others, they are not effective at all (1). Do any drugs treat the underlying causes of AD?

First Drug Approved by the FDA to treat AD

There is one drug that modifies an aspect of the disease process, aducanumab, which is the first drug approved by the FDA to treat Alzheimer’s disease (1). Aducanumab works by reducing the buildup of amyloid deposits in the brain in an effort to slow the progression of AD (1). This sounds great on the surface, but unfortunately, it’s effectiveness in slowing Alzheimer’s disease has not been fully established. This is because the drug was approved based on a special status under the FDA that did not require the drug maker to prove clinical efficacy (“Accelerated Status”). The two parallel design phase 3 clinical trials had failed to demonstrate a required clinical trend at a predetermined interim analysis. As a result the trials were halted before they were completed. Post-hoc analysis has suggested efficacy, but this was not sufficient for the FDA’s full approval, subsequently, CMS determined there was insufficient evidence to cover the drug under Medicare and Medicaid despite the accelerated approval status. At present, aducanumab will go back to clinical trial status and scientists are working to develop several other disease-modifying medications, including anti-amyloid therapies, to help those with mild cognitive impairment and early Alzheimer’s, with hopes that early intervention could prevent or slow its progression (1).

One reason why aducanumab may not deliver on the promise hoped for complete disease reversal or marked slowing of cognitive decline (it’s benefit appears to be marginal) is that other factors, besides amyloid, are likely contributing to why people get Alzheimer’s in the first place.

A Multifactorial Approach to AD

So with the current treatment standards for AD in mind, where do we go from here? Is there hope of helping dementia sufferers reclaim their lives, or is it a lost cause? Of course, it is not a lost cause. Scientists are working diligently to develop drugs to treat AD, but as we have discussed, AD is a multifactorial disease, so no single drug is likely to stop its progression. This begs the question, are we taking the right approach in the first place? Should we instead be taking a multifaceted approach to match the traits of the disease? Indeed, we can take a multifactorial approach. And indeed, the research shows that when a multifactorial, lifestyle-oriented approach is taken, AD may be prevented or in some instances, its deadly progression even reversed.

Although no drugs have been shown to change the long-term outcomes of AD, a nutritious, plant-rich diet, adequate physical activity, controlled blood pressure and blood sugar, sound sleep, healthy body weight, and engaging social activity are just a few lifestyle factors that have all been associated with reduced risk for dementia, although interventional research is currently being done to determine degree of causation (1,2).

One approach that encompasses this multifaceted lifestyle method is the use of lifestyle medicine, which we will discuss in more detail below.

How To Protect The Aging Brain with Lifestyle Approaches

According to the The Institute of Functional Medicine, “Functional medicine is a systems biology-based approach that focuses on identifying and addressing the root cause of disease. Each symptom or differential diagnosis may be one of many contributing to an individual’s illness” (3).

With this approach, a medical diagnosis can be the result of more than one cause (3). For instance, depression may be caused by inflammation, omega-three fatty acid deficiency, and low thyroid function working together in concert (3). A cause may also result in multiple diagnoses. For example, a widely impacting disruption in the body like chronic inflammation can be part of the cause of depression, heart disease, diabetes, and even cancer (3). With the functional medicine school of thought, how a cause manifests depends on a multitude of factors, such as a person’s genes, diet, and environment, and only treatment approaches that address all of the causes will result in lasting benefit beyond mere symptom suppression (3).

As you can see, this broadly-reaching approach is not captured in the traditional single pill/treatment methodology. It instead looks at the whole body as one overall unit and how the systems of the body interconnect with each other.

One of our notable lecturers at our 7th Annual Academic Summit: Breakthroughs in Brain Health, CVD, and Autoimmunity, Ken Sharlin, founder of Brain Tune Up!, a functional medicine neurology protocol, will also be presenting on this important and exciting topic. His approach targets the seven core biological systems which comprise the functional medicine matrix and include: Assimilation, Defense & Repair, Energy, Biotransformation and Elimination, Transport, Communication, and Structural Integrity. Ken will be discussing how each of these integral systems plays a role in brain health and specific strategies to improve the functioning of these systems in your patients.

For example, assimilation is the process of digesting and absorbing nutrients, including not only the G.I tract, but also the lungs and skin which interrelate (4). Remember, in functional medicine we do not view the body’s systems as separate; rather, they are interconnected parts working in concert to accomplish common objectives.

Another important system, defense & repair, refers to the immune system and how it interacts with the rest of the body’s tissues and repair systems (4). At its core, it involves the ability to recognize “self” from “non-self” and protecting the body through inflammation, the coordinated efforts of white blood cells, immune system signaling molecules like cytokines, and nutritional signalers like omega 3’s and omega 6’ fatty acids (4). All of these components of our defense and repair system play a critical role in the protection and repair of damaged or diseased tissues (4).

At 7th Annual Academic Summit: Breakthroughs in Brain Health, CVD, and Autoimmunity, Ken will be discussing five key lifestyle strategies that impact the functional medicine matrix as it relates to brain health including:

For example, just one serving of green leafy veggies a day has been shown to slow cognitive decline (4). Fiber is now recognized as an important component of brain health since the gut bacteria it feeds produce butyrate, a short-chain fatty acid that helps supply the brain with energy, linking gut-health with brain-health (4). Other ingested substances may worsen brain health. For instance, refined carbs and sugar as well as excessive alcohol consumption increases advanced glycation end products (AGES), which generates high levels of oxidative stress that is capable of damaging the brain over time (4).

Ken will also discuss more about the interesting role of sleep in brain health and ways to help your patients improve their sleep. Previously thought to be a time of rest, we now know that sleep is an active time when the brain is repairing itself. It is a time of growth, repair, and cleanup (4). Perhaps, most relevant to AD, it is a time when the brain’s internal waste clearance system, the glymphatic system, clears itself of soluble proteins and metabolites from the Central Nervous System (5). As we know, AD is characterized by a buildup of proteins (tau) in the brain. With poor sleep, is it possible that tau is not being cleaned out as efficiently, thus, building up and converting to the wrong isomeric form, the form that is linked with AD? It may well be. The importance of quality sleep is becoming more widely recognized for its role in brain function and AD, as corroborated by numerous studies.