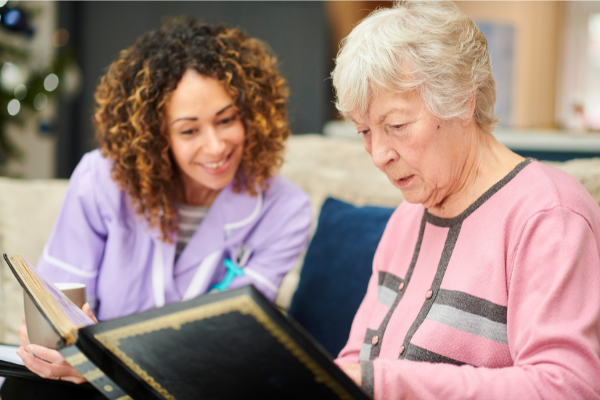 Alzheimer’s Dementia (AD) is a disease of multifactorial origin. It does not have one specific cause; rather, there are multiple pathways that contribute to its development and progression.

We know that Alzheimer’s Disease is multifactorial because it features a multitude of biochemical changes such as the following:

There are other factors at play. For example, in cases of early-onset AD it appears that there may be a genetic mutation at play (2). AD that develops later in age, which is more commonly seen, is likely the result of gradual, complex changes that accumulate in the brain over many years, even decades (2). But AD is not considered a normal part of the aging process. AD typically starts with milder memory problems as one of the first signs of cognitive impairment. For some people, this can progress into more serious memory impairments than are considered normal from aging, called mild cognitive impairment (MCI) (2). MCI also puts one at higher risk for developing Alzheimer’s, though not all people do (2).

Researchers are working studiously to put together the puzzle of AD, starting with observing the earliest signs, including a decline in non-memory components of cognition like vision/spatial skills, difficulty with word finding, or impaired judgment and reasoning (2). They are also studying various biomarkers to pinpoint more concrete, biological signs of the disease’s progression such as detecting changes in various body fluids like blood and cerebrospinal fluid. Of course, more research is needed before we can use these techniques to diagnose AD in the medical setting, but it’s a good start (2).

The general consensus is that a combination of environmental, lifestyle, and genetic factors “activate” dementia, similar to how cancer often has no one trigger, rather a combination of factors that allow the cancer to develop (2). Furthermore, the degree to which one risk factor increases the chance of dementia over another may vary from person to person and depend on genetic influence (2). One thing that is clear is that age-related changes in the brain must play a role in the development of AD. We know this because many age-related changes such as brain region atrophy, inflammation, free radical damage, blood vessel damage, and a breakdown of the mitochondria all occur in AD (2).

We have already discussed how one major pathway, type three diabetes and brain-specific insulin resistance, may play a role in the development of AD. Now, we will delve into two other potential contributors, as well as research pointing to some potential treatment and new diagnostic strategies.

The Role of Autophagy

Recently, there has been research pointing to another mechanism that likely has its hand in the development of AD – conversion of tau protein to a more harmful form resulting from impairment of another important system, autophagy.

It appears that if tau “hangs around” for too long without being broken down, some of its amino acids can convert into an incorrect isomer/ form (3). The molecules no longer “fit” correctly, like trying to fit a square peg into a round hole, and the cells cannot function properly because of this poor fit (3).

But what causes those proteins to stick around for too long in the first place? Well, we know that the body’s process of clearing defective or worn-out proteins relies heavily on autophagy. We also know that autophagy slows after the age of 65, when AD is at greatest risk, for reasons not currently known (3).

From this research, we can deduce that if we take measures to improve autophagy, we may very well improve the risk or prognosis of AD. In simpler words, methods to increase autophagy, whether pharmaceutical or lifestyle-based, could serve as effective treatments for AD.

Apart from reduced autophagy playing a role in the development of AD, it has also been observed that at the beginning of neurodegenerative diseases (not just dementia), the microglia (immune cells of the brain) take up glucose to a far greater extent than is usual, as is depicted in FDG-PET brain scans that show the distribution of glucose across the brain (4).

The brain consumes more glucose than any other organ, and it follows that when regions of the brain demand higher glucose, they are using more energy to power the greater brain activity in those areas (4). So if the immune cells of the brain are requiring more and more energy (glucose) at the beginning stages of dementia, it is giving us a window into the initiation phases of the disease (4). Indeed, the microglia appear to be taking up large amounts of sugar to allow them to carry out highly-energetic immune responses which could help the brain defend itself against disease-related protein (tau) buildup. The brain recognizes this homeostatic disturbance and tries to heal itself by calling on the immune system (4). This gives scientists a great starting point when analyzing the causes of AD. We need to look more closely at the immune system’s hand in AD and more specifically, the brain’s immune cells, microglia (4).

Even more exciting, image-based data could even serve as a biomarker to capture the function of microglia and their response to various medical interventions in people diagnosed with dementia. In this non-invasive manner, we can tell if the treatments we are giving to patients are actually working by noting presence or absence of normalization of the microglia’s glucose uptake (4). Assessing the effectiveness of various treatments for AD could indeed be possible using PET technology (4).